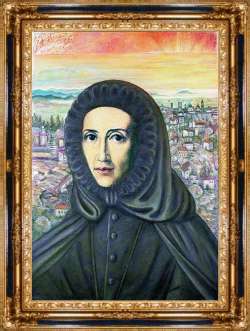 Teresa Verzeri was born in Bergamo (Italy) on July 31, 1801,the first of the seven children of Antonio Verzeri and the countess Elena Pedrocca-Grumelli. Her brother, Girolamo, became Bishop of Brescia. Her mother, doubtful of whether she should give herself to matrimony or embrace the monastic life, had listened to the prophetic word of her aunt, Madre Antonia Grumelli, a Franciscan Poor Clare Nun: "God has destined you for this state to become the mother of holy children."

At a very tender age Teresa learned from her mother, a prominent woman, to know and ardently love God. She was led in her spiritual journey by the Canon Giuseppe Benaglio, the Vicar General of the Diocese of Bergamo, who already accompanied the family.

Teresa completed her initial studies at home. Intelligent, gifted with an open spirit, vigilant, and upright, she was educated to discern, to seek true values and to be faithful to the action of grace. From childhood to maturity Teresa allowed herself to be led by the Spirit of Truth that engaged her in a constant and intense spiritual battle: in the light of faith she discovered and experienced the weight of her own weakness; she unmasked, as far as humanly possible, every idolatrous form of falsehood, pride, and fear, in order to surrender totally to God. Through grace, she travelled a road of detachment, of purity of intention, of simplicity and straightforwardness that brought her to seek "God alone."

Interiorly Teresa lived the special mystic experience of the "absence of God," anticipating something of the religious life of today: the weight of human solitude before a restless sense of the distance of God. Nevertheless, in unshakeable faith, Teresa never lost her confidence and abandonment to the living God, provident and merciful Father, to whom she devoted herself in obedience. Her lonely cry, like that of Jesus, became the entrusting of her whole self through love.

With the intention of pleasing God and doing only his will,her religious vocation matured at home and in the Benedictine Monastery of St. Grata. After a long and tormenting search, she left the Monastery to found the Congregation of the Daughters of the Sacred Heart of Jesus together with the Canon Giuseppe Benaglioon February 8, 1831, in Bergamo.

Teresa Verzeri lived during the first half of the 1800s, a time of great transformation in the history of Italy and the society of Bergamo, marked with political changes, revolutions, and persecutions that did not spare the Church, which was also wounded by Janenism and by the crisis of values, resulting from the French Revolution.

At a time when the devotion to the Sacred Heart found resistance, she gave to the first Daughters of the Sacred Heart this testament that characterises the spiritual patrimony of their religious family: "To you and to your Institute Jesus Christ has given the precious gift of his Heart, for from no one else can you learn holiness, he being the inexhaustible source of true holiness" (Libro dei Doveri, vol. III,p. 484).

Teresa saw very clearly the pressing needs of her times. Wherever charity called, she seized the situation, even the most dangerous and serious, with absolute availability, and with her first companions she dedicated herself to diverse apostolic services: "education of middleclass troubled girls; homes for orphans who were at risk, abandoned and even led astray; public schools, christian doctrine, retreats, holiday recreations and assistance to the infirm" (Libro dei Doveri, vol. III, p. 368).

In fulfilling her mission Teresa revealed her special talent as spiritual guide, as apostle and as pedagogue. She expressly professed the preventive system: "cultivate and attentively guard the mind and heart of your little girls while they are still young, to prevent as far as possible, any entrance of evil, it being better to avert a fall with your warnings and admonitions than to have to lift them up again with correction" (cf Pratiche, 1841).

Education is a work of freedom and persuasion, respecting individuality. For this she recommended that the young be allowed "a holy freedom so that they may do willingly and with full agreement that which, oppressed by command, would only be accomplished as a burden and with violence." In addition, she desired that the choice of methods established be adapted "to the temperament, the inclinations, the circumstances of each person... and be according to the capacity of each" (Libro dei Doveri, vol. III, p. 347 and 349).

In 1836 Canon Benaglio died and Teresa, supported by the obedience that guaranteed that the Congregation was willed by God, dedicated herself totally to its approbation, strengthening and expansion. In this she was affronted by many obstacles placed in the way by civil authorities, and also by ecclesiastics who put her virtue to the hard test. Teresa showed herself heroic in abandonment to the will of God that sustained her.

After a life of intense giving, Teresa Verzeri died in Brescia on March 3,1852. She left to the Congregation, already approved by the Church and by the government, a vast documentation - above all in the Constitutions, the Book of Duties and in more than 3,500 letters - from which it is possible to draw all the richness of her spiritual and human experience.

The precious spiritual patrimony transmitted to the Congregation finds its center in the Heart of Jesus from whom the Daughters of the Sacred Heart inherit the spirit of magnanimous charity that compels one to be "all to all " in an intimate relation with the Father and in loving solicitude for one's neighbor.

Teresa expressed it this way: "The Daughters of the Sacred Heart of Jesus, like those who draw their charity from the very source of love, that is, from the Heart of Jesus Christ, must burn with the same love of the Divine Heart for their neighbor: purest charity that has no aim save for the glory of God and the good of souls; universal charity that excludes no one but embraces all; generous charity that does not draw back from suffering, is not alarmed by contradiction, but rather, in suffering and opposition, grows in vigor and conquers through patience" (Libro dei Doveri, vol. I, p. 58).

Animated by this spirit, the Daughters of the Sacred Heart of Jesus continue the mission of Teresa today in Italy, Brazil, Argentina and Bolivia, in the Central African Republic and in Cameroon, in India, and in Albania.

In the contemplation of the Heart of Christ they receive the mandate to go to every man and woman with a dedication that loves the poor with predilection, is open for every service, is always solicitous to promote the dignity of the person, to be the Heartof Christ there where the need is greatest.The relics of TeresaVerzeri are venerated in the chapel of the Daughters of the Sacred Heart of Jesus, in Bergamo.