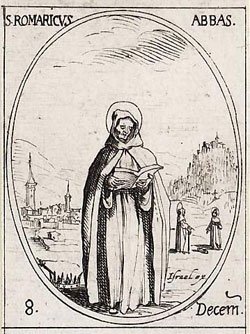 In the account of St Amatus of Remiremont it is related how he brought about the conversion to God of a Merovingian nobleman named Romaric, who became a monk at Luxeuil; and how they afterwards went together to the estate of Romaric at Habendum in the Vosges, and established the monastery which was later known as Remiremont (Romarici Mons). The father of Romaric had lost his life and his lands at the hands of Queen Brunehilda, and his young son became a homeless wanderer; but at the time of his meeting St Amatus, Romaric was a person of distinction at the court of Clotaire II, with considerable property and a number of serfs. These he enfranchised, and it is said that when he was tonsured at Luxeuil several of these newly freed men presented themselves to the abbot for the same purpose. Remiremont was founded in 620 and St Amatus was its first abbot, but his duties soon devolved upon St Romaric, who at the time of his death had governed for thirty years. Among the early recruits was the friend of Romaric, St Arnulfus of Metz, who about 629 came to end his days in a nearby hermitage. Shortly before his death St Romaric was disturbed by the news that Grimoald, the son of another old friend, Bd Pepin of Landen, was plotting to exclude the young prince Dagobert from the Austrasian throne. The aged abbot made his way to Metz, where he remonstrated with Grimoald and warned the nobles who supported him. They heard him quietly, treated him with courtesy, and sent him back to his monastery. Three days later St Romaric died.