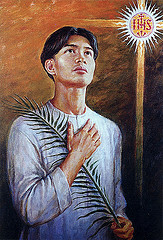 Saint Pedro Calungsod (c. 1654 - April 2, 1672) is a Filipino Roman Catholic martyr who was killed while doing missionary work in Guam in 1672. He was beatified on March 5, 2000, by Pope John Paul II. As a skilled sacristan and teacher of cathecism, he was a companion of Blessed Diego Luis de San Vitores to the Marianas Islands. Through their efforts, many receive the sacraments especially that of baptism. A plot to kill Pedro and San Vitores started when a certain Choco, a Chinese who gained influence over the Macanas of Marianas Island, circulated false accusations that the missionaries were spreading poison through the ritual of the pouring of water (i.e. baptism), and through the ritual of Catholic Masses. Calungsod and Diego San Vitores were both murdered after baptizing an infant and mother who converted to the Roman Catholic faith.

Calungsod is the second Filipino saint after San Lorenzo Ruiz if approved by the Pope and the Holy See.