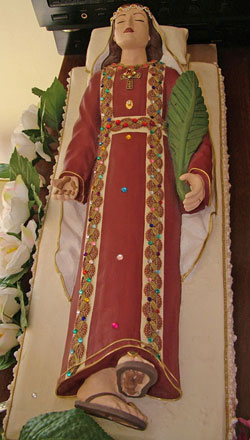 Martinian, his brother Saturian and their two brothers were slaves in Africa at the time of Arian King Jenseric's persecution of Catholics. They were converted to Christianity by another slave, Maxima. When their master insisted that Martinian marry Maxima, who had taken a vow of virginity, they fled to a monastery but were brought back and beaten for their attempt to escape. When their master died, his widow gave them to a Vandal, who freed Maxima (she later entered a monastery) and sold the men to a Berber chief. They converted many, petitioned the Pope to send them a priest, and were then tortured and dragged to their deaths by horses for their Faith. Their feast day is October 16.