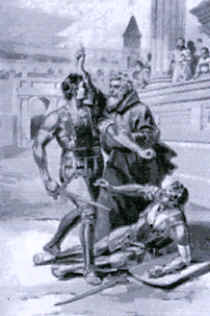 St. Telemachus (also known as Almachius) was an Eastern ascetic who was stoned to death in Rome when he tried to stop a contest between gladiators in the arena. He entered the stadium while the games were in progress and, going down into the arena, attempted to separate the combatants. The spectators of this cruel pastime were infuriated, and at the instigation of Satan, who delights in blood, they stoned to death this messenger of peace. His death, according to Theodoret, caused Emperor Honorius to abolish gladiatorial contests. He feast day is January 1.