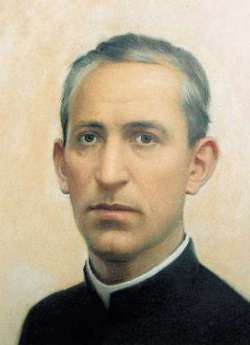 Blessed Luigi Variara was born in Viarigi (Asti), Italy, on 15 January 1875 and died on 1 February 1923 in Cucuta, Colombia. He was an apostle to the lepers in Colombia and founder of the congregation of the Daughters of the Sacred Hearts of Jesus and Mary who ran the homes he set up for lepers. He was born to Pietro Variara and Livia Bussa. When he was 12 years old he entered the Salesian Oratory in Turin, while the founder Don Bosco of the Salesian Congregation, was still alive. Luigi had the privilege of meeting this living saint on one occasion, and it was an encounter that changed his life. John Bosco looked into the eyes of the young boy, and this gaze was for Luigi a confirmation of his future Salesian vocation. John Bosco died a month later on 31 January 1888.

In 1891 he entered the novitiate and shortly afterward he made his profession in the hands of Bl. Michael Rua, Don Bosco's first successor. After his novitiate, Luigi did his study of philosophy at Valsalice and there he met Fr Michele Unia, the Salesian apostle of lepers of Colombia, who had come to speak to the community about his mission. His talk won Luigi over, and in 1894 he left for Colombia with Fr Unia when he returned. Here he dedicated himself to the lepers of Agua de Dios, sharing with them his passion for music and drama. Fr Unia died shortly thereafter, leaving Luigi and three other priests in charge of the leper colony. The three years before his priestly ordination in 1898 proved to be a time of spiritual growth and maturation for the young Luigi, who came to understand better the reality of sacrifice and self-giving in serving others, and in running the risk of contagion through continual contact with lepers. After his ordination, he exercised his duties as priest in the leper colony, and with responsibility for the parish, often spending four or five hours a day in the confessional. He also continued to teach music and drama, especially concerned for the moral health of the young people of Agua de Dios. From the first year of his priesthood, Luigi felt the need to open a leprosarium for young patients, a project that mirrored that of his predecessor, Fr Unia. The scope of such a foundation was to educate these children in the faith, to teach them how to read and write and skill in manual labour, so that they would be saved from a life of desolation and vice. In 1905 the "Michele Unia Youth Hostel" was opened. On 7 May 1905 he founded the Congregation of the "Daughters of the Sacred Hearts of Jesus and Mary", in order to provide care for the residents of the hostel. "Our goal", he stated, "along with that of our own personal sanctification, is to care for the leperosy patients in the hostel and in serving God by offering ourselves as victims of expiation". He also said of the year 1905: "Never as in this year did I feel so happy to be a Salesian and I bless the Lord for having sent me to this leper colony where I learned how to gain heaven". As the Congregation was also founded with the intention of offering to women lepers the possibility to consacrate their lives to God, Fr Variara's initiative was much criticized and misjudged by other religious institutes and even by some of his own brothers, who questioned whether this new Salesian "branch" was in accordance with the charism of their founder. He had founded a community of "outcasts" it seemed, in the eyes of the world. Luigi, however, held firmly to God's will, and began to climb the Calvary of not being understood or accepted by those who should have been closest to him. He received, however, the consolation and relief of knowing that he was acting out of obedience, since Fr Michael Rua, Don Bosco's first successor stood behind him and encouraged him to continue with the foundation. His greatest trial proved to be his transferral from Agua de Dios to Venezuela, a separation from his Congregation which cast a shadow of mystery on the foundation itself and began 18 years of misunderstandings for Luigi. He was trasferred from city to city after leaving Agua de Dios, and in 1921 he was definitvely moved to Táriba. He continued, however, to keep in contact with Mother Lozano, cofoundress of the Institute. He assured her that there was "nothing to fear: if it is a work of God, it will last". Luigi Variara died on 1 February 1923 in Cucuta.

The Congregation is currently present in Colombia, Ecuador, Venezuela, Bolivia, Brazil, Mexico, Spain, Italy, Dominican Republic and Equatorial Guinea and is dedicated in the service of the poor and the sick.