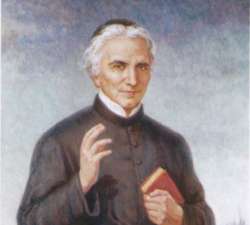 Luigi Scrosoppi was born on the 4th of August 1804 in Udine,a city in the region of Friuli in the north of Italy. He grew up in a family atmosphere of faith and Christian charity. At twelve years of age he began preparing for the priesthood at the Udine diocesan seminary, and was ordained in 1827. At his side were his two brothers Charles and John Baptist, both of them also priests.

The wretchedly poor conditions during the 1800s in a Friuli devastated by famine, wars and pestilence were for Luigi an invitation to care for those most in need. With other priests and a group of young teachers he dedicated himself to gathering together and educating poor and abandoned girls from Udine and the surrounding countryside. To them he devoted all his material possessions, his energies and his affection. He did not spare himself, and when the situation called for it he went around begging; he relied on people's help, and above all, trusted in the Lord. In fact his whole life bears witness to his great trust in Divine Providence. Regarding the works of charity in which he was engaged, he wrote: "The providence of God, who prepares minds and hearts to undertake His works, was alone the foundation of this Institute... that loving tender Providence that never deserts those who trust in Him". He lost no opportunity in fostering this confidence in the girls he gathered together and in the young women devoted to their education. They came to be called "school mistresses" because they were skilled in sewing and embroidery but were also able to teach "reading, writing and arithmetic" as they used to say. They were women of different ages and backgrounds, and in each of them there matured the decision to place their lives in the hands of the Lord and to consecrate themselves to Him, serving Him in the family of the "outcast". On the evening of the 1st of February 1837, as a sign of their definitive decision, nine women put aside their possessions and chose to live their total dedication to Him in poverty. In this simple manner the Congregation of the Sisters of Providence, the religious family founded by Father Luigi, came into being. Others came to join the first group. Some were rich, others poor, some educated, others illiterate, some from the nobility, others of humble origins. In the house of Providence there was room for all and all become sisters.

The founder encouraged them to make sacrifices and urged them to take affectionate care of the girls, whom they were to regard as the "apple of their eyes". He said to them: "More than anything else, these daughters of the poor need to be educated in affection and to learn all that is necessary to live an honest life". And once again: "The weariness, persevering effort, constant work and the tiresome attention needed to assist and teach them should not cause you discouragement because you know you are doing all this for Jesus".

In the meantime, Luigi was reflecting on the need to make a more total consecration to the Lord. He was attracted by the ideal of poverty and universal brotherhood of St Francis of Assisi, but the events of his own life and of history led him to follow in the footsteps of St Philip Neri, the singer of joy and freedom, the saint of prayer, humility and pastoral charity. Luigi followed his "Oratorian" vocation in 1846, and at the mature age of 42 he became a son of St Philip. From him he learned that meekness and tenderhearted spirit which would make him ever more suited to the task of founder and father of the Congregation of the Sisters of Providence.

Showing great regard and concern for the human development of the Sisters and their growth in holiness, he spared neither help, nor advice nor encouragement. He carefully watched over their vocation, putting their faith to the test so that they might grow strong. He condemned vanity, the desire to be noticed, and could be severe when he saw attitudes of hypocrisy and superficiality. Yet what paternal tenderness he showed in the face of frailty and the need to be understood, supported and consoled!

Gradually Father Luigi took on the fundamental traits of a spiritual life centred on Jesus Christ, loved and imitated in the humility and poverty of his incarnation in Bethlehem, in the simplicity of his working life at Nazareth, in his total immolation on the cross on Calvary, and in the silence of the Eucharist. And since Jesus had said: "Whatever you did to one of the least of these my brethren you did it to me", it is to them that every day Father Luigi devoted his life with the practical commitment to "seek first the kingdom of God and his justice" convinced that all the rest will be given according to the gospel promise.

All the works he set in motion during his life reflect this preferential option for the poorest, the lowliest, the abandoned. "I shall open twelve houses" - he prophesied - "before I die" and so it was. Twelve houses in which the Sisters of Providence devote themselves to a service that is humble, enterprising and joyful on behalf of young girls left helpless, of the poor, the sick and neglected, of the elderly left alone.

At the same time, however, deeply committed to doing good, Father Luigi did not limit himself to his own works, in which the Sisters collaborated with generous people ever ready to give them a helping hand. He willingly gave his spiritual and material assistance to other initiatives undertaken in Udine by people of good will. He supported all the activities of the Church and showed particular concern for the young men in the Udine seminary, especially the poorest of them.

In the second half of the nineteenth century, the different regions of Italy were being united. The political and military aspects of this unification resulted in a particularly difficult period for Udine and the whole of Friuli, which is on the frontier and at the cross roads between the north and south of Europe and between east and west. One of the consequences of the unification, which unfortunately took place in a climate of anticlericalism, was a decree suppressing the "House of the Orphans" and the Congregation of the Oratorian Fathers in Udine.

Now an old man, but with his habitual openness of spirit, he understood that the time had come to hand over the reins to the Sisters, and this he did with tranquility and hope. At the same time he maintained contact with them all through his letters in which he strengthened the ties of affection and love, and in his paternal concern never tired of recommending community spirit and trust.

Through his deep union with God and his experience over many years Father Luigi had acquired a special spiritual wisdom and intuition which enabled him to read hearts: sometimes he even revealed the gift of knowledge about secret inner thoughts and situations which were known only to the person concerned.

At the end of 1883, as his strength began to decline, he was forced to give up all work, and he constantly suffered from a high fever. The illness took its inexorable course. He refold the Sisters not to be afraid "because it was God who raised up their religious family and made it grow and He it is who will see to its future".

When he knew the end was near, he wished to greet everyone. So he wrote his last words to the Sisters: "After my death, your Congregation will have many troubles, but afterwards it will have a new life. Charity! Charity! This is the spirit of your religious family: to save souls and to save them with Charity".

During the night of Thursday, the 3rd of April 1884, he finallywent to meet Jesus. The whole of Udine and the people of the surrounding countryside hastened to see him one last time and to beg his protection from heaven.

Through his efforts on behalf of the little ones, of the poor, of young people in difficulty, of those who are suffering, of all those living in trying circumstances, Father Luigi still continues today to show everyone the path of union with God, of compassion and of love, and is still ready to accompany the steps of those who entrust themselves to the Providence of God.