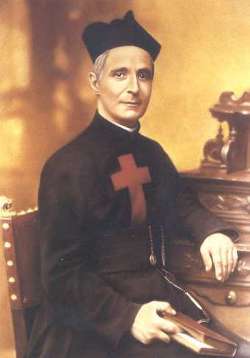 Fr. Louis Tezza was born in Conegliano (TV) on 1st November 1841, the only son of Augustine Tezza and Cathetine Nedwiedt. His father, who was a medical doctor, died when Louis was nine and his mother decided to move to Padova, where Louis continued his studies.

At the age of fifteen he entered the Camillian Order (Ministers of the Sick of St. Camillus de Lellis). Having entrusted her son to the Camillian noviciate, and being certain of the authenticity of his vocation, she herself entered the convent of the Visitation where she was renowned as an exceptional woman and religious sister.

After his ordination Louis was entrusted with the formation of the young religious. Four years later he was presented with an opportunity of fulfilling a long standing desire by becoming a missionary to Africa, but obedience decreed that he obey his legitimate superiors who were not in favour of the venture. Instead of Africa, he was transferred to Rome as novice master.

In 1871 Fr. Louis was sent to the new foundation in France as novice master, where he would later become the first provincial. Through his dedication and zeal he succeeded in establishing the common life within the community, while at the same time setting up specific Camillian social facilities in the local areas for the spiritual and corporal benefit of the sick. With the suppression of the religious institutes in 1880 he was expelled from France, as he was seen as a foreigner. However, he secretly returned and managed to unite the religious who were scattered here and there throughout the country. Thus he not alone resisted the suppression, but he was responsible for laying the foundations for the development that would later follow.

He was elected Procurator and Vicar General of the Camillians in 1891, and on his return to Rome he providentially met Josephine Vannini (beatified on 16th Oct. 1994). He had for some time cherished in his heart the desire to establish a group of consecrated women who would serve the sick in accordance with the spirit and charism of St. Camillus de Lellis. Thus on the 2nd of February 1892 the Congregation of the Daughters of St. Camillus was born, enriching the Camillian charism with the feminine characteristics of tenderness, hospitality, intuition and attentive listening. These were the very gifts which Camillus sought in his religious when they assisted the sick. The Institute was approved by the Holy See in 1931, and has experienced a rapid growth and expansion.

The Apostle of Lima

Just when it appeared that Fr. Louis' activity was drawing to a close, another very important chapter was about to be written. At the age of 59 he was sent to Peru as Official Visitor, with the brief of reforming the Camillian community of Lima, which for over a century had been separated from the Order, and now risked being suppressed. This task was seen as involving a short stay in Lima, but when the time to return to Rome came both the Archbishop and the Apostolic Nuncio considered his presence indispensable, defining him as "as a man inspired by God and providential for Lima". He accepted their request, sanctioned by his superiors, as the will of God and entrusted all to Providence. Thus he remained in Lima for 23 years, until his death.

During this time he was to enrich his surroundings with his great charity and love of God, expressed through the exercise of an intense apostolic activity. Besides his work in re-establishing the regular life in the religious communities, he dedicated himself to the needs of the sick, especially those who were poor, in their homes, in the hospitals and in the prisons. He was confessor and spiritual director to the archdiocesan seminary and various religious Congregations. He was sought as a counsellor both in the Nunciature and in Archbishop's House. He successfully helped another founder, the servant of God Teresa Candamo, overcome her initial difficulties with her new Institute.

His discreet work, and intelligent and deep love, coupled with his loving and authoritative character led to his being regarded as the "saint of Lima". Here Fr. Louis died on 23rd September 1923. Un unknown visitor carved the words "apostle of Lima" on his tomb.

He was described by the Card. Lauri as "the holiest priest in the diocese of Lima" , and on his death the faithful distributed a remembrance card which highlights the main traits of his sanctity: "he was sough after as a father and venerated as a saint: he is no longer with us but he continues to teach us from the tomb; his presence and comportment was angelic; his word was that that of a minister of the gospel; his heart a repository of noble affection; his mission was always salvific. He passed among us as a heavenly vision, ever good and humble, always charitable. Faith was the basis of all his work while goodness enveloped him like a mantle and tiara"

His mortal remains are to be found in the Generalate of the Daughters of St. Camillus on the Via Anagnina in Grottaferrata (Rome).

Fr. Louis Tezza's message can be readily understood in the light of the gospel. Jesus had a special concern for the sick, and furthermore he identified personally with his suffering brothers: "I was sick and you visited me. In so far as you this to one of the least of these brothers of mine, you did it to me" (Mt.25.40)

Fr. Louis was chosen by God not only to live this charism of mercy for the sick, but to spread it through the founding of the Institute of the Daughters of St. Camillus, an institute dedicated to care for human life from the moment of conception to natural death. He showed every Christian how to act in the face of suffering; to care and alleviate, and especially to value it for one's own sanctification and the redemption of others.

Fr. Louis encourages us to believe in and operate in accordance with God's plan for each one of us. The cornerstone of his existence was obedience to God. He was constantly seeking the will of God, and striving to carry it out in his life. He could see God's plan in the signs of the times, the ordinary events of life, in the decisions of his superiors, and he was convinced that these had to be followed no matter what the cost in personal sacrifice.

He leaves each one of us today with this personal challenge, in the hope that we will make it our own:

"God's invitation to become saints is for all, not just a few.
Sanctity therefore must be accessible to all.
In what does it consist? In a lot of activity? No.
In doing extraordinary things? No, this could not be for everybody and at all times.
Therefore, sanctity consists in doing good, and in doing this "good" in whatever condition and place God has placed us.
Nothing more, nothing outside of this".