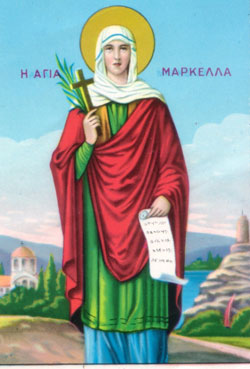 Marcella was a Roman matron. She was widowed after nine months of marriage, refused to marry Cerealis, the consul, and formed a group of noble ladies to live a life of austerity and asceticism. She was tortured by the Goths looting Rome in 410 to force her to reveal the whereabouts of her wealth, which she had long since given to the poor, was released, but died shortly after, in August. She had a correspondence with St. Jerome in which ahe answered queries she put to him about spiritual matters. Her feast day is January 31st.