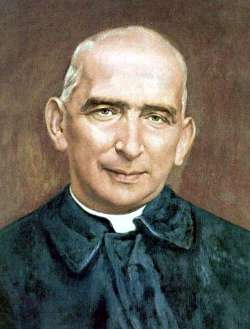 John Calabria was born in Verona on October 8th, 1873 by Luigi Foschi and Angela Calabria, the youngest of seven brothers.

Since the family lived in poverty, when his father died he had to interrupt his studies (he was in the fourth grade) and find work as an apprentice: however, Don Pietro Scapini, Rector of St. Lawrence, who helped him to overcome the entrance exam in high school of the seminary.

Resumed his studies after his military service, and in 1897 he enrolled at the Faculty of Theology Seminary, with the intention of becoming a priest. A singular episode accadutogli marked the beginning of his activity on behalf of orphans and abandoned: one night in November he found an abandoned baby and welcomed him into his house, sharing the facilities.

Newly ordained priest (on 11 August 1901), was appointed curate of St. Stephen and confessor of the Seminary. In 1907 he was appointed Rector of San Benedetto del Monte, where he also undertook the care and concern for the soldiers.

Since then the congregation continued to spread abroad (in 1934 four brothers were sent to India to take care of Paria).