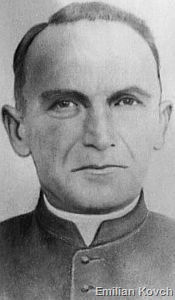 Emilian graduated from the College of Sergius and Bachus in Rome. Married, and father of six. Ordained in 1911. Worked throughout Galacia, and with Ukrainian immigrants to Yugoslavia. Chaplain to Ukrainian soldiers fighting the Bolsheviks in 1919. Parish priest in 1922 at Peremyshliany, Ukraine, a village of 5,000, most of whom were Jewish. An active priest, he organized pilgrimages and youth groups, and welcomed poor and orphaned children of all faiths into his home.

When the Nazis invaded Ukraine, they began rounding up Jews. To save them, Father Emilian began baptizing them, and listing them as Christians. The Nazis were wise to this trick, and had prohibited it. Emilian continued, but was arrested by the Gestapo in December 1942. Deported to the Majdanek concentration camp in August 1943. There he ministered to prisoners, hearing confessions, and celebrating Mass when possible. Martyred in the ovens.