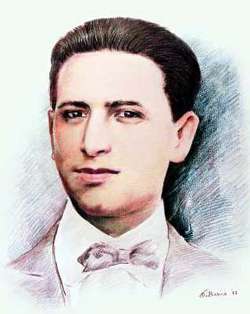 David entered the seminary at Durango when very young, but had to leave to help support his family by working as a miner; never returned to seminary, and remained a layman. Worked with Saint Luis Batiz in his local parish. Joined Catholic Action (ACJM), and served as its president in 1925. Worked against the government's anti-religion laws. Vice-president of the National League for the Defense of Religious Liberty (LNDLR).

On 29 July 1929, a LNDLR meeting drew a crowd of over 500. A few days later a group of soldiers gathered up the LNDLR officers, and announced they were taking them to the state capital to explain their position. After leaving town, the soldiers stopped the cars and accused them of plotting armed revolt against the government. David was offered his freedom if he would recognize the legitimacy of Calle's anti-religious government; he declined. Martyred with Saint Salvador Lara, Saint Manuel Moralez, and Saint Luis Batiz. One of the Martyrs of the Cristera War.