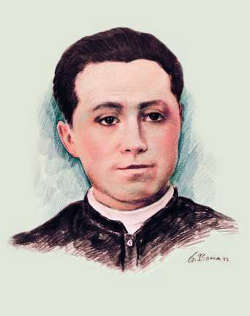 David was the son of Juan Uribe Ayal and Victoriana Velasco Gutierrez, the seventh of eleven children in an inevitably poor family. Baptized on 6 January 1889. Entered seminary at Chilapa in 1903 at age 14; excellent student. Sub-deacon in 1910, deacon in 1911, and ordained on 2 March 1913.

On 30 July 1926, as a matter of public safety, the bishops of Mexico ordered a halt to public worship, and for churches to close; David, reluctant but obedient, accepted the order, but later returned covertly to his pastoral duties. Arrested by the military on 7 April 1927, and taken to Cuernavaca. Offered freedom if he would become a bishop in the schismatic church that was subservient to the government; he declined. He wrote his will on 11 April 1927, and the next day was driven to a remote location near San Jose Vidal, Morales. He prayed for himself and his executioners, gave them his belongings, promised to pray for them in the next life, and was martyred.