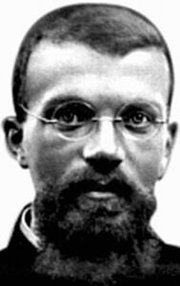 Callistus Caravario was born at Cuorgné, on 18 June 1903. From his earliest years, everyone thought he was an excellent child for his meek and reflective nature. He seemed naturally inclined to prayer and loved his mother very much, as witnessed by the many letters he wrote. At five years of age, he and his family moved to Turin close to the Porta Nuova Oratory.

He was amongst the first in his class at school, and served Mass each morning. On the advice of Fr Garelli the Rector of the Oratory, he entered the Novitiate and became a Salesian. In 1922 Bishop Versiglia was in Turin who spoke of the missions to the Brothers. Callistus told him: "Bishop, you will see me in China".

Fr Garelli left for China and Callistus insisted so much that after a short time he followed him there. He kept his word. His mother told Fr Garelli: "I am willing to leave my son in Don Bosco's hands". "With all the affection I am capable of", Callistus would write, "thank you Lord, for having given me such a good mother". "Mother, here is news that will make you happy: This morning I gave my first catechsim lesson in Chinese".

Callistus was sent to Macao, and then for two years to Timor where he edified everyone, including the rector, for his goodness and apostolic zeal. "My good mother", he wrote, "pray that your Callistus may not be just a hlaf priest but completely the priest".

On 18 May 1929, he returned to Shiuchow, where bishop Versiglia ordained him priest and entrusted him with the mission at Linchow. In a short time he had visited all the families and earned the sympathy of the school children. Meanwhile in China the political situation had become very tense, especially for Christians and foreign missionaries.Persecutions began.

On 13 February 1930 Fr Caravario was in Shiuchow to accompany the bishop on his pastoral visit to the Linchow mission. Some young boys and girls went with them; they had been studying in Shiuchow. On 25 February a group of Bolshevik pirates stopped the bishop's boat, wanting to take the girls. Bishop Versiglia and Fr Callistus stopped them.

They were taken by force and ultimately shot, but before they were killed they heard one another's confessions. Their last breath was spent for their beloved China.