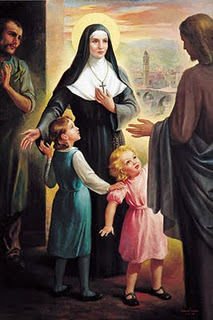 Benedetta recieved the jewel of good christian formation from her devout parents. Always a devoted youngster, she received the gift of a profound mystical experience at age twenty, which left her with the desire to pursue a vocation as a religious. However, her parents preferred strongly that she marry, and in filial piety, Benedetta bowed to their wishes, and married Giovanni Frassinello, in 1816. They lived together for two years as man and wife. In 1818, the couple agreed to live together chastely, dedicated to God. At this same time, they took Benedetta's younger sister Martha into their home to nurse her through her final fight with Cancer. When Martha died, in 1825, the two entered religious orders, Benedetta joining the Ursiline Congregation, and Giovanni the order founded by St Jerome Emiliani.

Benedetta was forced to return home because of failing health only a year later, but obtained a miraculous cure through the intercession of Saint Jerome Emiliani. Now she felt called to undertake a new work of devoting herself to the education of young girls. She obtained her bishop's approval, and the bishop also requested that Giovanni leave the seminary in order to assist Benedetta with the work, because of the scope of the task. The two took a vow of perfect chastity into the hands of their bishop, and set out on their joint task.

Benedetta perservered in following God's will through a very unusual set of circumstances. Her courage and conviction helped to transform women's education in the region. Although after first setting out, Giovanni and Benedetta had to endure gossip and calumny that could have destroyed their work, Benedetta was wise enought to withdraw and place her beginnings in the hands of the bishop to prevent this, leaving to live as a nun in Ronco Scrivia.

Eventually, Bendetta was able to found the Congregation of the Benedictine Sisters of Providence. The guiding charism of her order is their focus on the education of young girls and confidence in and abandonment to God in the living out of their vows.

After correctly predicting the time of her death, Benedicta died peacefully in Ronco Scrivia at her motherhouse, on March 21 1858.