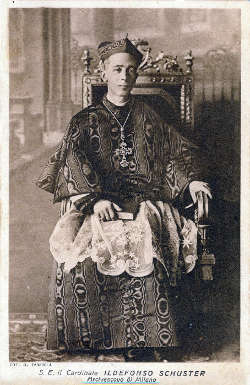 Alfredo Ludovico Schuster was born on January 18, 1880 in Rome, Italy, he entered the Benedictine monastery of St Paul-Outside-the-Walls when he was 11, and was ordained a priest in 1904. He served his own community in various offices until he was elected abbot in 1918. He taught at several pontifical institutes, served as consultor to the Sacred Congregation of Rites, and held other high offices. Pope Pius XI appointed him Archbishop of Milan in 1929, consecrated him and created him a Cardinal. Bl. Afredo gave priority to catechesis and promoted the role of the laity in the parish and in Catholic Action. He denounced Fascism and its racist ideology. He championed the cause of the poor during World War II, founded the Institute of Ambrosian Chant and Sacred Music and the Ambrosianeum and Didascaleion cultural centres. Above all, he proposed holiness as a goal for all, and the only means to human happiness. In 1954 he withdrew to Venegono Seminary, where he died with an exhortation to holiness on his lips.