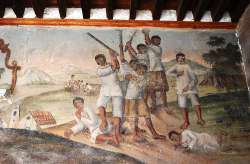 In May of 1990, at Mexico City's shrine of Our Lady of Guadalupe, Pope John Paul II, beatified three children of Tlaxcala, who had suffered martyrdom - Cristobalito, Antonio and Juan.

These child martyrs (12 to 13 years old) were the first souls in the entire New World to be so sacrificed and sanctified. They were witnesses to and participants in the Spanish evangelization of all of the Americas. All three gave their lives for the Faith between 1527 and 1529, when they refused to recant their commitment to Christ. Cristobalito's pagan father, a tribal chief, had his son beaten with clubs and finally set on fire for his faith. Antonio and Juan were clubbed to death two years later.

Continue reading about Martyrs of Tlaxcala