Martyrs of the Theban Legion 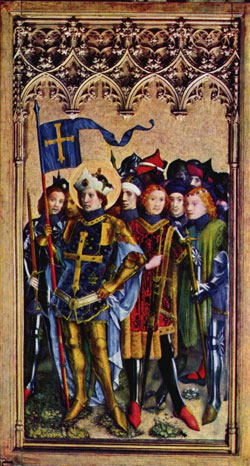 The members of a Roman legion composed largely of Egyptians and serving in the army of co-Emperor Maximian, colleague of the famed hater of Christians, Emperor Diocletian. While serving in France, the legion marched to Agaunum, where it encamped for pagan rituals. Maurice, a commander, and Exuperius, Candidus, Innocent, Vitalis, two Victors, and the men of the legion refused to worship pagan deities, or possibly refused to massacre the local innocent populace. They were supposed to be pressured to obey by witnessing the beheading of some of their officers, but refused to offer sacrifices to the Roman gods. Reportedly, Maximian brought in another legion to slay the 6,600 Christians. A basilica, St. Maurice-en-Valais, was built from about 369-391 to commemorate this remarkable martyrdom. This cult is now confined to local calendars.

Continue reading about Martyrs of the Theban Legion