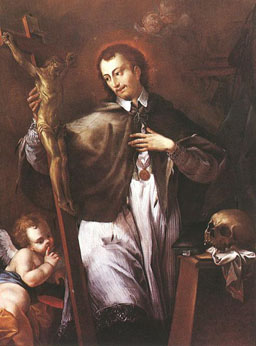 In his early childhood, John Nepomucene was cured of a disease through the prayers of his good parents. In thanksgiving, they consecrated him to the service of God. After he was ordained, he was sent to a parish in the city of Prague. He became a great preacher, and thousands of those who listened to him changed their way of life. Father John was invited to the court of Wenceslaus IV. He settled arguments and did many kind deeds for the needy people of the city. He also became the queen's confessor. When the king was cruel to the queen, Father John taught her to bear her cross patiently. One day, about 1393, the king asked him to tell what the queen had said in confession. When Father John refused, he was thrown into prison. A second time, he was asked to reveal the queen's confession. "If you do not tell me," said the king, "you shall die. But if you obey my commands, riches and honor will be yours." Again Father John refused. He was tortured. The king ordered to be thrown into the river. Where he drowned, a strange brightness appeared upon the water. He is known as the "martyr of the confessional." He is patron of Czechoslovakia, where he is invoked against floods and against slander. His feast day is May 16.