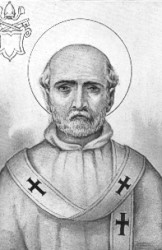 St. Evaristus succeeded St. Clement in the See of Rome in the reign of Trajan and governed the Church about eight years, being the fourth successor of St. Peter. The Liber Pontificalis says that he was the son of a Hellenic Jew of Bethlehem, and, certainly incorrectly, that he divided Rome into several "titles" or Parishes, assigning a priest to each, and appointed seven deacons for the city. He is usually accorded the title of martyr, but his martyrdom is not proved; it is probable that St. Evaristus was buried near ST. Peter's tomb in the Vatican. His feast day is October 26th.