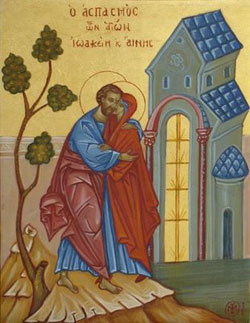 By tradition Joachim and Anne are considered to be the names of the parents of Mary, the Mother of God. We have no historical evidence, however, of any elements of their lives, including their names. Any stories about Mary's father and mother come to us through legend and tradition.

We get the oldest story from a document called the Gospel of James, though in no way should this document be trusted to be factual, historical, or the Word of God. The legend told in this document says that after years of childlessness, an angel appeared to tell Anne and Joachim that they would have a child. Anne promised to dedicate this child to God (much the way that Samuel was dedicated by his mother Hannah -- Anne -- in 1 Kings).

For those who wonder what we can learn from people we know nothing about and how we can honor them, we must focus on why they are honored by the church. Whatever their names or the facts of their lives, the truth is that it was the parents of Mary who nurtured Mary, taught her, brought her up to be a worthy Mother of God. It was their teaching that led her to respond to God's request with faith, "Let it be done to me as you will." It was their example of parenting that Mary must have followed as she brought up her own son, Jesus. It was their faith that laid the foundation of courage and strength that allowed her to stand by the cross as her son was crucified and still believe.

Such parents can be examples and models for all parents.

Anne (or Ann) is the patron saint of Christian mothers and of women in labor.

Parents of Mary, pray for all parents that they may provide the loving home and faithful teaching that you provided your daughter. Amen