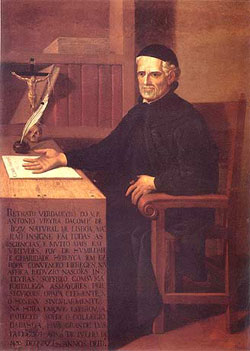 Antonio Vieria was an African born in Portugal. When he was fifteen years old, he became a Jesuit novice and later a professor of rhetoric and dogmatic theology. He went to Brazil where he worked to abolish discrimination against Jewish merchants, to abolish slavery, and to alleviate conditions among the poor.