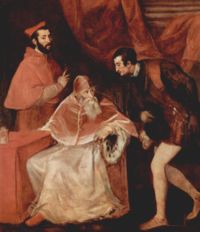 A native of Mantua, Italy, Anselm was such a firm opponent of the corrupt practice of "lay investiture" (the conferring of ecclesiastical offices by lay rulers) that for several years he refused to accept appointment to the episcopacy of Lucca, because it would have required him to receive his "investiture" from the emperor Henry IV. But after being consecrated bishop of Lucca by Pope Saint Gregory VII, Anselm served in his diocese with great zeal while observing monastic piety in his spiritual life. Celebrating daily Mass with tearful devotion, he spent several hours each day in prayer. In accordance with the ecclesiastical reforms championed by Pope Gregory, Anselm mandated the restoration of ecclesiastical discipline among the canons of his cathedral. But the canons were so attached to their dissolute habits that they rebelled, and expelled the bishop from the city. Anselm was later appointed papal legate to Lombardy. He was so skilled in scripture studies that for any given biblical text he was able to repeat from memory all the principal explanations of that passage given by the Church Fathers.
Continue reading about St. Anselm of Lucca