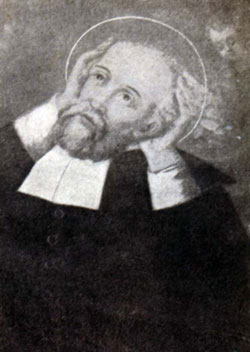 Hi readers, it seems you use Catholic Online a lot; that's great! It's a little awkward to ask, but we need your help. If you have already donated, we sincerely thank you. We're not salespeople, but we depend on donations averaging $14.76 and fewer than 1% of readers give. If you donate just $5.00, the price of your coffee, Catholic Online School could keep thriving. Thank you. Help Now >
Aventine, of Bourges, France, was schooled in the spiritual life by the bishop of Troyes, Saint Loup. Loup's episcopal successor, Saint Camelianus, selected Aventine to be Troyes's steward and almoner, in charge of the cathedral's possessions and the distribution of alms. Having served the Church thus with humility, purity, and charity, Aventine thereafter obtained permission to withdraw into the woods to live as a hermit. He had a particular fondness for animals, never wanting to kill any of the forest creatures except when necessary. Whenever he found any tiny fish in a pitcher of water drawn from a nearby brook by a monk who assisted him, he made a point of placing the fish unharmed back into the stream. When on one occasion a deer pursued by hunters rushed into the cave that served as Aventine's hermitage, Aventine protected the frightened animal by closing the door in order to hide it from the hunters until they had passed. He habitually fed the small birds of the forest that flocked onto his fingers as he offered them a handful of crumbs.