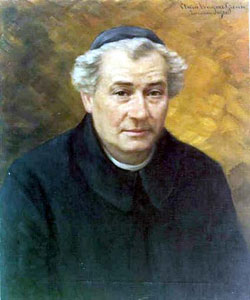 As a child, Luigi Talamoni, of Monza, Italy, attended daily Mass with his father. He served as an altar boy with the hope of becoming a priest. Subsequently, Luigi began studying for the priesthood at an oratory that functioned as a school for boys too poor to afford the preparatory education needed to qualify for the seminary. He continued on to the archdiocesan seminary of Milan, and was ordained at the age of twenty-two. Father Talamoni was to remain at the Milan seminary for the rest of his life, serving as a professor. With silent patience he endured the humiliating mockery to which he was subjected by certain other faculty members and seminarians with liberal ideas who considered him too traditional. But he was revered by Achille Ratti, the future Pope Pius XI. In addition to serving at the seminary, Father Talamoni also spent many hours hearing confessions at Milan's cathedral, where the laity flocked to him as a holy and wise confessor. To serve the needs of the sick and the elderly, he co-founded with Maria Biffi Levati a new women's congregation, the Misericordines of Saint Gerard. Father Talamoni died on January 31, 1926.