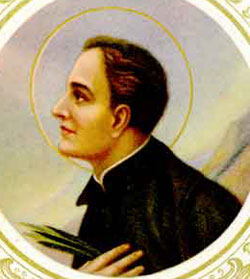 Charles Garnier was the son of the treasurer of Normandy. He was born at Paris, educated at Louis-le-Grand College there, and joined the Jesuits in Paris in 1624. He continued his studies at Clermont, taught at the Jesuit college at Eu for three years, and was ordained in 1635. The following year he was sent to Quebec, Canada, with Father Pierre Chastellain and two other priests as missionaries to the Huron Indians. Charles was murdered by a war party of Iroquois, the Hurons' traditional enemies, on December 7 at the Indian village of Etarita, where he was stationed. He was canonized in 1930 by Pope Pius XI as one of the North American Martyrs. His feast day is October 19.