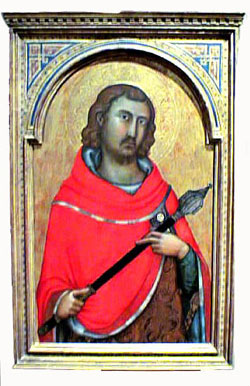 According to an account that is doubtlessly spurious, Vitalis was a wealthy citizen of Milan, and perhaps a soldier. He was married Valeria, and they were the parents of SS. Gervase and Protase (which they were not). When he encouraged St. Ursicinus to be steadfast at his execution, the Vitalis was racked and then buried alive. Valeria died as the result of injuries she suffered when attacked by the pagans. They were martyred near Milan probably under Emperor Marcus Aurelius, but all else is suspect. Feast day - April 28th.