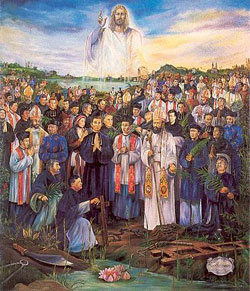 Andrew Trong van Tran, of Kim Long, Vietnam, worked as a silk weaver for the pagan Vietnamese emperor Minh Mang. Upon being identified as a Catholic, Andrew was tortured after refusing his captors' demand that he should trample upon a cross. During his subsequent imprisonment, he won the sympathy of his jailors to the point that several times they allowed him to go out of the prison for the night. Andrew utilized these nocturnal furloughs to go to confession and receive Holy Communion from a Vietnamese priest, and to visit his own mother. When at length Andrew was taken out to be beheaded, he went to his execution with a joyful disposition, reciting the rosary along the way. Upon arriving at the execution site, Andrew gave the fetters in which he had been bound to his mother, who was present. Following the beheading, Andrew's mother took his head to give it a loving interment. Years later, Pope Leo XIII was to praise Andrew's mother for imitating the Blessed Virgin Mary in "witnessing her son sacrifice his life." The pontiff added, "And when his head was put to the sword, she held it to her heart."
Continue reading about St. Andrew Trong Van Tran