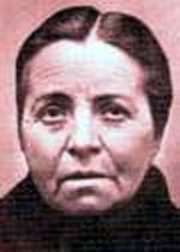 Maria Teresa Ferragud Roig, of Algemesi, Spain, was the mother of seven children, including one son who became a Capuchin friar and five daughters who became cloistered Capuchin Sisters of the Order of Saint Clare. The five sisters shared the same convent in Agullent, where shortly before the Spanish Civil War one of them died from natural causes. Following the outset of the war, the four remaining sisters, facing grave danger from the anti-Catholic Popular Front, took refuge in their mother's home in Algemesi. Here they succeeded in continuing their convent life of hour upon hour of mental prayer, recitation of the Divine Office, and manual labor. But in October of 1936, Popular Front militiamen came to Maria Teresa's home to arrest her four daughters. The eighty-three-year-old mother insisted upon going with her children to prison. A few days later, on the night of October 25, militiamen shot to death the four nuns and their mother. The name of one of the sisters is unknown, but the others were Maria Jesus, Maria Veronica, and Maria Felicidad.