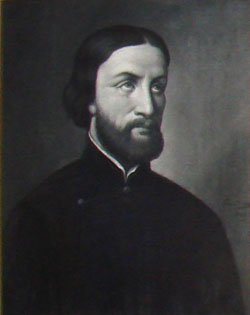 During the French Revolution, priests that remained faithful to the pope found a refuge in the home of the Gagelin family of Montperreux, France. As a five-year-old son of this devout family, Francois Gagelin told his parents, "I want to be a priest." Years later, after joining the Paris-based Society for Foreign Missions, Francois embarked for the Asian missions and was ordained a priest at Quang Tri, Vietnam. As a missionary in Vietnam, he observed, "In these countries, we suffer from pains of body and of spirit...But we ought not to count for anything all that in comparison to the great glory that God prepares for those who serve faithfully." A renewal of persecution against Vietnam's Catholics prompted Father Gagelin to surrender himself to the pagan authorities in 1833 in order to give courage to the faithful. He was charged with "hiding religious pictures and statuettes." While in prison, he confided to a friend that he had longed for martyrdom since his childhood, and as a priest had asked God for this fate every time he elevated the Precious Blood during Mass. Father Gagelin was executed by beheading.
Continue reading about St. Francois Gagelin