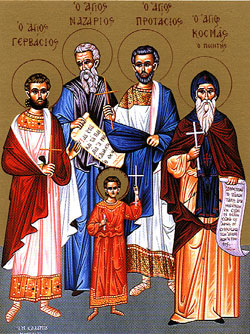 Celsus of Armagh was a layman named Ceallach mac Aedha. He succeeded to the bishopric of Armagh (it was a hereditary See) in 1105 when he was twenty-six, was consecrated bishop, put into effect many reforms in his diocese, and ruled well and effectively. He mediated between warring Irish factions, was a friend of St. Malachy, and ended the hereditary succession to his See by naming Malachy as his successor on his deathbed. He died on April at Ardpatrick, Munster. His feast day is April 7th.