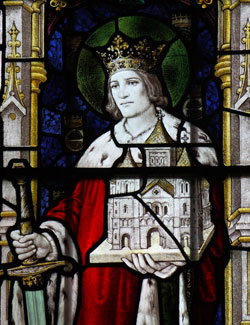 Having married the Christian princess (Saint) Ethelburga, Edwin, the pagan king of the English kingdom of Northumbria, began to consider becoming a Christian himself. As the king delayed a final decision about his religion, Pope Boniface V wrote to him, inviting him to accept "the medicine of salvation." To encourage Queen Ethelburga in her efforts to convert her husband, the pope sent her as gifts a silver mirror and a comb for her hair. At length, Edwin was won over through the efforts of Ethelburga's chaplain, (Saint) Paulinus of York. Edwin spent the six remaining years of his reign as a devout Catholic monarch who brought peace to his kingdom. In a letter to Edwin, Pope Honorius I praised the king's newfound piety and zeal: "Your sincere Christian character, afire with ardent faith in the worship of your Creator, has shone out far and wide." The subsequent slaying of Edwin in a military battle instigated by the irreligious Welsh king Cadwallon and the pagan English warrior Penda of Mercia led to Edwin being venerated as a martyr slaughtered for his Christian faith.
Continue reading about St. Edwin of Northumbria