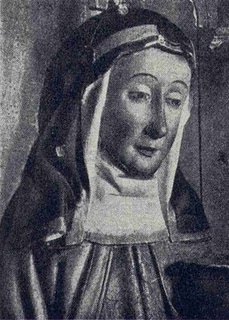 SAINT CATHERINE OF SWEDEN Virgin, c.1330-1381 This saint is the daughter of an even more famous woman-Saint Bridget (Birgitta) of Sweden. Catherine, who was born about 1330, was a married woman who, with her husband, took a vow of continence. She went to Rome in 1348, where her mother had gone after the death of Catherine's father. Catherine's husband died after she had been in Rome a short time, and for the next twenty-five years the two women used that city as a base for pilgrimages to a variety of places, including Jerusalem. When not on pilgrimage, they spent their days in prayer and meditation and in working with the poor and instructing them in religion. This seemingly quiet life was not without perils and adventures. Dissolute young lords repeatedly sought to seduce the Swedish princess, but God's providence unfailingly thwarted their efforts. After the trip to Jerusalem, Bridget died, and Catherine took her mother's body back to Sweden, burying it at Vadstena, in the convent of the Order of the Holy Savior, which Bridget had founded. Catherine became superior of the order and died on March 24, 1381, mourned like her mother by the whole of Sweden.