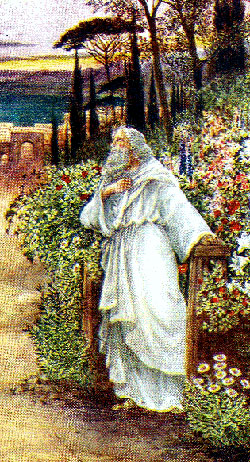 Phocas earned his living by cultivating a garden near the city gate of Sinope (now in Turkey). The quiet and beauty of the plot he cultivated proved quite conducive to his exercise of prayer in the course of his labors. He shared with the poor what he earned from his gardening, and opened his home to travelers lacking a place to stay. Phocas' Christian identity became known to the pagan Roman authorities. Soldiers were dispatched to find and arrest him. Upon nearing Sinope, they stopped at Phocas' door and received lodging from him, unaware that their host was the man they were charged to capture. At his table, they spoke openly of their mission before retiring for the night. As the soldiers slept, Phocas kept watch in prayer to prepare himself for martyrdom. The next morning, he revealed to them his identity. In a turn of events similar to the martyrdom of Saint Eudoxius (see September 5), the stunned soldiers were at first reluctant to carry out their orders against their kind host, but in the end they beheaded him. Phocas is venerated as a patron saint of both gardeners and mariners.
Continue reading about St. Phocas the Gardener