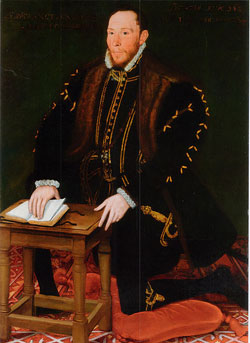 Queen Elizabeth I's suppression of the Catholic faith in England provoked many Catholics in the country's north to attempt an armed rebellion in 1569, the "Rising of the North." The earl Thomas Percy, a devout Catholic husband and the father of four girls, reluctantly joined in the ill-fated uprising, insisting that its sole object must be the restoration of the Catholic faith. The rebellion was swiftly crushed and its participants executed by the hundreds. Captured in Scotland, Thomas devoted his time in prison to fasting and prayer, spending entire days on his knees. He used a compendium of prayers that he himself had compiled in his own handwriting. Refusing offers of pardon if he would deny his faith, Thomas was ultimately sent back to England and sentenced to death. On the night before his beheading, he told an attendant urging him to rest, "If Christ chided his disciples for not watching one hour with him, do you wish me, who have so little of life left, to sleep for an hour?" Thus he spent most of his last night in prayer.
Continue reading about Bl. Thomas Percy