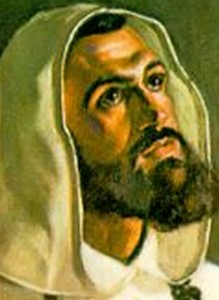 Melchoir Garcia Sampedro, of Cortes, Spain, was born into a family so poor that he had to pay for his own education by teaching younger students. At the age of twenty-four, he entered the Dominican Order. After arriving in Vietnam to serve in the missions, Father Melchoir was eager to declare his priestly identity openly, despite the danger of execution from hostile pagan authorities. He was nonetheless persuaded by the Vietnamese faithful to remain in hiding so as to continue ministering to them. Following the martyrdom of the vicar apostolic, (Saint) Jose Diaz Sanjuro, in July of 1857, Father Melchoir succeeded him in this office and received episcopal consecration. The new bishop was soon captured and imprisoned in a cage. On July 28, 1858, he was put to death with exceptional barbarity. His executioners stretched him out on the ground, and striking him repeatedly, hacked off first his hands and feet, then his arms and legs, and finally his head. During the excruciating ordeal, the bishop prayed aloud.