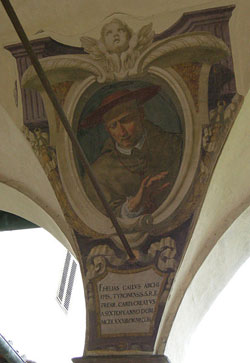 Helie de Bourdeille, a Franciscan friar from Agonac, France, was consecrated bishop of Perigueux in 1438. A zealous pastor, he willingly gave penitents all the time they needed to confess to him, even if this meant spending three or four hours with them. Bishop Bourdeille celebrated Mass almost daily, for which he spent two hours in preparation, and afterwards offered a long thanksgiving. In addition, he attended at least one other Mass daily, and as many as four on solemnities. He customarily knelt for all his prayers, except when illness prevented him. In 1468, he was appointed archbishop of Tours. Having already been in the habit of serving meals to the poor at his dinner table before sitting down to take his own dinner, Archbishop Bourdeille expanded this practice in Tours. On ordinary days he fed fifteen paupers, on feast-days twenty-five, and on the major solemnities as many as seventy-two. The archbishop died while uttering the words from Psalm 31 (verse 6) repeated by the dying Christ, "Into your hands I commend my spirit."
Continue reading about Bl. Helie de Bourdeille