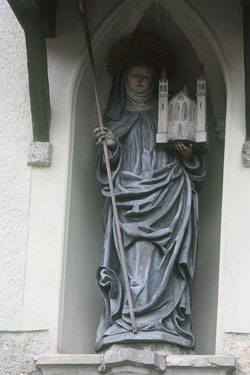 At the invitation of the missionary bishop Saint Rupert, the maiden Erentrude, a relative of his, left the city of Worms, Germany to begin a convent in the newly founded settlement of Salzburg (now in Austria). The hilltop Benedictine convent that Rupert erected for Erentrude and her companions came to be known as Nonnberg. As abbess, Erentrude schooled her religious community in holiness by her personal example and instructions. When Rupert was near death, Erentrude begged him to pray that she might die before him, as she was fearful to be without him as her spiritual father on earth. Rupert answered that the time of one's death must be left to the judgment of God. Nevertheless, at her request, he agreed to pray in the next life for her to follow him soon. They spoke at length of the joys of heaven before tearfully saying farewell to each other. Shortly after Rupert's death, as Erentrude was praying intently for the repose of his soul, he appeared to her in a vision, saying, "Come, dear sister, come to the kingdom you have so long been striving to reach." She died only a few days later.
Continue reading about St. Erentrude