Bl. Maria Candida of the Eucharist 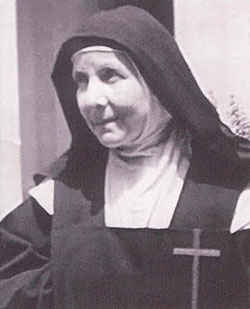 As a child, Maria Barba, of Catanzaro, Italy, learned to play the piano. At the age of fifteen, she underwent an interior conversion that turned her heart and mind totally to God. Sadly, her subsequent aspiration to religious life was opposed by her family. During this time, Maria found consolation in developing a profound love for the Eucharist and in reading the autobiography of the Carmelite, Saint Thérčse of Lisieux. When at the age of thirty-six Maria was finally able to become a religious, she entered the Discalced Carmelite Order, having already assimilated their spirituality. Taking the religious name Maria Candida of the Eucharist, she soon became her convent's prioress. Ever zealous for the faithful observance of the Carmelite rule, she once admonished a nun for her laxity, asking her, "My daughter, why do you insult the Lord like this? Don't you realize that mankind needs you?" In the 1930s, Mother Candida wrote a book on the Eucharist steeped in her own devotion to the Blessed Sacrament. She died on June 12, 1949.
Continue reading about Bl. Maria Candida of the Eucharist