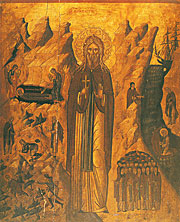 Born near Burgos, Spain, John became a priest at a young age. As he was returning by sea from a pilgrimage to Jerusalem, his ship encountered a dangerous storm that threatened to sink it. John thereupon begged the mercy of God for all the pilgrims aboard the vessel. Scarcely had he finished his prayer when the sea calmed. After safely arriving in Spain, John sought a place of solitude where he could devote himself to contemplation. He erected a hermitage for himself at a forested site known as Urteca, situated along the pilgrim road to Spain's most popular shrine, Compostela. He also built a church in honor of Saint Nicholas, to whose intercession he attributed his deliverance from the storm at sea. In addition, John established at Urteca a hospice for lodging pilgrims and other travelers. He devoted his manual labors to the construction and repair of bridges and roads for the pilgrim route to Compostela. Shortly before his death, John offered special prayers for the peace of the Church and for the faithful departed.
Continue reading about St. John the Hermit