David, the youngest son of Scotland's virtuous queen, (Saint) Margaret, succeeded his brother to the Scottish throne in 1124. David's friend, (Saint) Aelred, abbot of the English monastery of Rievaulx, was later to recount David's religious devotion and his generosity to the poor. From his riches he also endowed the founding of several dioceses and many monasteries. David was to express profound remorse for an ill-conceived and ill-fated invasion of England he had ordered on behalf of his niece. He also suffered the sorrow of the premature death of his only son. On Friday, May 22, 1153, as David was nearing death, he received the anointing of the sick and Viaticum, after which he devoted himself to reciting the Psalms with those at his bedside. The next day, the king told those urging him to take a rest from his devotions, "Let me rather think about the things of God, so that my spirit may set out strengthened on its journey from exile to home. When I stand before God's tremendous judgment seat, you will not be able to answer for me or defend me." He thus continued with his prayers. David died at dawn on Sunday, May 24.
Continue reading about St. David I of Scotland 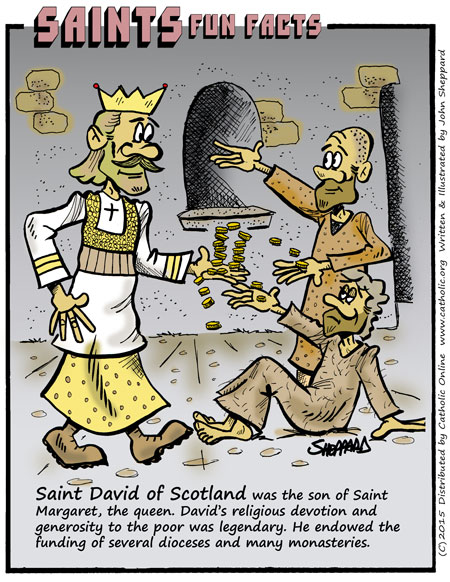