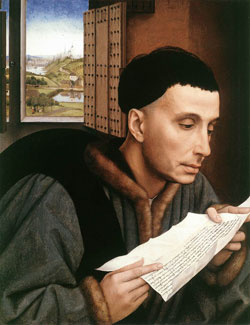 Ivo Helory, a legal scholar from Kermartin, France, served as an ecclesiastical judge in the dioceses of Rennes and Treguier, becoming known as an advocate of the poor. Following his ordination, he served as a parish priest for eighteen years. Each day before celebrating Mass, and at other times as well, he would prostrate himself before the altar, tearfully offering fervent prayers. Similarly, he would prepare for his sermons on his knees. In his preaching, Ivo habitually included examples drawn from the lives of the saints. He kept his breviary and his Bible at his side almost constantly. Ivo generously gave his time to his priestly duties of hearing confessions and bringing Viaticum to the dying, carrying the Eucharist in a silver pyx over his heart. On his deathbed, Ivo kept his eyes fixed upon a crucifix placed before a window of his room. Upon hearing a bystander speak of asking for a doctor, Ivo responded that his only doctor was Jesus Christ. He repeatedly made the sign of the cross before breathing his last. Ivo is venerated as a patron saint of lawyers.
Continue reading about St. Ivo of Kermartin