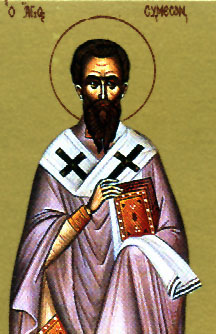 Simeon, bishop of the cities of Seleucia and Ctesiphon in Persia (Iran), was arrested during the persecution of Christians under the Persian king Sapor II. In response to the king's threats, Simeon responded, "I wish to hold out my head to the sword and die for my people...my sacrifice is not much compared to that of my Master!" After professing his faith and refusing to worship the sun, Simeon was imprisoned together with a hundred other Christians, including bishops and priests. While a prisoner, he persuaded the king's own tutor to return to the Catholic faith. On the night of Holy Thursday, Simeon kept a vigil, praying that he might be privileged to die on Good Friday, "on the same day, and at the same hour" as his Savior. His prayer was answered the next day, after he was made to watch the beheading of all the other Christians imprisoned with him, whom he encouraged before suffering death himself. The Christian layman Pusicius, a supervisor of the king's workmen, encouraged one of the priests facing martyrdom. He himself was thereupon executed together with his daughter Askitrea.
Continue reading about St. Simeon Barsabae and Companions