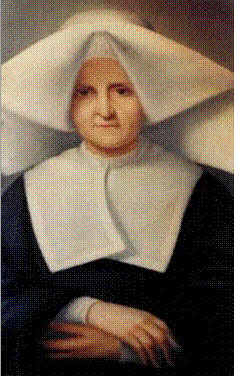 In her childhood, Jeanne Marie Rendu, of Confort, France, experienced first-hand the terror to which faithful Catholics were subjected during the French Revolution. Her parents sheltered in their home priests that refused to take the Jacobin regime's anti-papal oath of the "Civil Constitution of the Clergy." Jeanne had to receive her First Holy Communion secretly, administered to her in the basement of her home. At the age of ten, she lost her father, and shortly afterward one of her four sisters. In 1802, Jeanne entered a religious congregation devoted to the care of the needy, the Daughters of Charity, taking the name Rosalie. She later became superior of a Paris convent of her congregation. Sustaining her works of charity with a deep prayer life, she continuously recited the rosary amid her labors and went before the Blessed Sacrament to resolve her difficulties. During the revolutions of 1830 and 1848, she treated the wounded on both sides of these conflicts, even mounting the barricades to nurse the fallen. On one occasion, she placed herself between the warring parties and shouted to them, "We do not kill here!"