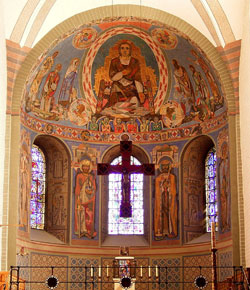 Patroclus, a citizen of Troyes, Gaul (France), was taken into custody for being a Christian by the Roman regime of the emperor Valerian. Upon being questioned about his faith by the Roman general Aurelian, Patroclus replied, "I adore the living and true God, who inhabits heaven, and regards the humble, and knows all things..."Aurelian then demanded that Patroclus worship the pagan gods, threatening him with death if he did not, but Patroclus remained steadfast. The general ordered the prisoner to be fettered and tortured. Three days later, Aurelian summoned Patroclus and asked him whether he was now willing to offer sacrifice to the gods. Patroclus answered, "The Lord delivers the souls of his servants, and will not forsake them that hope in him." In the end Aurelian ordered that the prisoner be taken to the bank of the Seine River to be executed there, but when a flood disrupted the execution, Patroclus took advantage of the confusion to escape. He was soon recaptured and beheaded.
Continue reading about St. Patroclus

Prayer To Her St. Therese