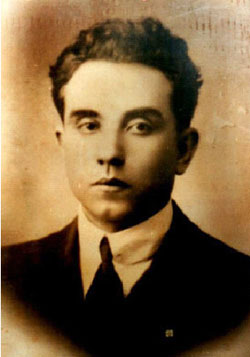 Anacleto Gonz├Īlez Flores was born on 13 July 1888 in Tepatitl├Īn, Jalisco, Mexico. He was greatly involved in social and religious activities and was an enthusiastic member of the Catholic Association of Young Mexicans (ACJM). He taught classes in catechism, was dedicated to works of charity and wrote articles and books with a Christian spirit. In 1922 he married Mar├Ła Concepci├│n Guerrero and they had two children. By 1926, the situation in Mexico had worsened and Anacleto, who up until this time had advocated passive, non-violent resistance, joined the cause of the National League for the Defence of Religious Freedom upon learning of the murder of four members of the ACJM. In January 1927 guerrilla warfare spread throughout Jalisco and from his many hiding places Anacleto wrote and sent bulletins and studied major strategies. The young man was captured on the morning of 1 April 1927 in the home of the Vargas Gonz├Īlez family, along with the two Vargas brothers. He was taken to the Colorado jail, where his torture included being hung by his thumbs until his fingers were dislocated and having the bottom of his feet slashed. He refused, however, to supply his captors with any information. Jos├® Anacleto Gonz├Īlez Flores was condemned to death and was shot together with the Vargas Gonz├Īlez brothers and Luis Padilla G├│mez on that same day, 1 April 1927.
Continue reading about Bl. Anacleto Gonzßlez Flores