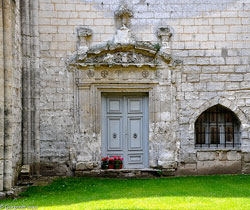 As a student of the cathedral school of Chartres, France, Gerard, a native of Mantois, studied under the monk Herbert, a convert from Judaism, and (Saint) Fulbert, the future bishop of Chartres. When subsequently Herbert was sent from his own monastery of Saint Peter to restore the abbey of Lagny, Gerard entered the latter religious community, receiving the habit from Herbert. Herbert later sent Gerard to found the monastery of Crepy-en-Valois. Subsequently appointed abbot of Fontenelle (Saint-Wandrille) Abbey, Gerard manifested a deep fidelity to his monastic state and great administrative skills. But one monk in the community so bitterly resented Gerard's observance of the rule and his valiant opposition to a tyrannical nobleman that he murdered the abbot as he was sleeping. Gerard's death was seen by the monks of Fontenelle as a martyrdom "because he died for the truth."