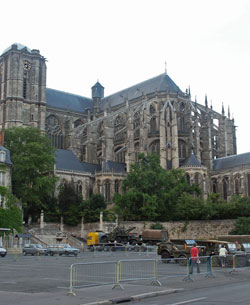 Julian is said to have been a native of Rome, where he was consecrated a bishop. Around the middle of the third century, he was sent to Gaul (France) to preach the Gospel to the tribe of the Cenomani. Upon coming to Le Mans, the capital city of the Cenomanis' territory, Julian found it to be suffering from a critical water shortage. As the citizens looked on, the bishop thrust the tip of his staff into the ground and dropped to his knees to pray for divine intervention. Thereupon water gushed out of the ground, a miracle that won for Julian the trust of the people and of the civic authorities, who allowed him to preach freely within Le Mans. The city's leading citizen was converted together with his whole family. This nobleman donated part of his palace to serve as Le Mans' first cathedral church. Many other conversions followed, as the people witnessed Julian's solicitude for the poor, the sick, and orphans. He wrought numerous miracles, including the raising of a dead man to life. In later centuries, Saint Julian came to be highly venerated in England.