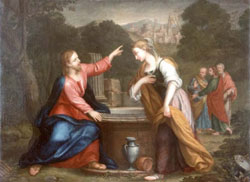 Samaritan martyr. According to Greek tradition, Photiona was the Samaritan woman with whom Jesus spoke at the well as was recounted in the Gospel of St. John, chapter four. Deeply moved by the experience, she took to preaching the Gospel, received imprisonment, and was finally martyred at Carthage. Another tradition states that Photina was put to death in Rome after converting the daughter of Emperor Nero and one hundred of her servants. She supposedly died in Rome with her sons Joseph and Victor, along with several other Christians, including Sebastian, Photius, Parasceve, Photis, Cyriaca, and Victor. They were perhaps included in the Roman Martyrology by Cardinal Cesare Baronius owing to the widely held view that the head of Photina was preserved in the church of St. Paul's Outside the Walls.