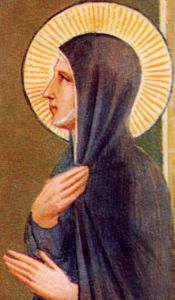 Blessed Villana was the daughter of Andrew de'Botti, a Florentine merchant, and was born in 1332. When she was thirteen she ran away from home to enter a convent but her attempts were unsuccessful and she was forced to return. To prevent any repetition of her flight, her father shortly afterwards gave her in marriage to Rosso di Piero. After her marriage she appeared completely changed; she gave herself up to pleasure and dissipation and lived a wholly idle and worldly life. One day, as she was about to start for an entertainment clad in a gorgeous dress adorned with pearls and precious stones, she looked at herself in a mirror. To her dismay, the reflection that met her eyes was that of a hideous demon. A second and a third mirror showed the same ugly form. Thoroughly alarmed and recognizing in the reflection the image of herself sin-stained soul, she tore off her fine attire and, clad in the simplest clothes she could find, she betook herself weeping to the Dominican Fathers at Santa Maria Novella to make a full confession and to ask absolution and help. This proved the turning point of her life, and she never again fell away. Before long Villana was admitted to the Third Order of St. Dominic, and after this she advanced rapidly in the spiritual life. Fulfilling all her duties as a married woman, she spent all her available time in prayer and reading. She particularly loved to read St. Paul's Epistles and the lives of the saints. At one time, in a self-abasement and in her love for the poor, she would have gone begging for them from door to door had not her husband and parents interposed. So completely did she give herself up to God that she was often rapt in ecstacy, particularly during Mass or at spiritual conferences; but she had to pass through a period of persecution when she was cruelly calumniated and her honor was assailed. Her soul was also purified by strong pains and by great bodily weakness. However, she passed unscathed through all these trials and was rewarded by wonderful visions and olloquies with our Lady and other saints. Occasionally the room in which she dwelt was filled with supernatural light, and she was also endowed with the gift of prophecy. As she lay on her deathbed, she asked that the Passion should be read to her, and at the words "He bowed His head and gave up the ghost", she crossed her hands on her breast and passed away. Her body was taken to Santa Maria Novella, where it became such an object of veneration that for over a month it was impossible to proceed with the funeral. People struggled to obtain shreds of her clothing, and she was honored as a saint from the day of her death. Her bereaved husband use to say that, when he felt discouraged and depressed, he found strength by visiting the room in which his beloved wife had died. Blessed Villana's cultus was confirmed in 1824. Her feast day is February 28th.